Introduction to Taxonomy and Classification

MINDS ON & DIAGNOSTIC:
- Question to class/discussion: Why do you think we are interested in classifying organisms?
After students give answers play video https://www.youtube.com/watch?v=Q0cIfO4UeZE


Pedagogy:
- How many species have been discovered: About 1.8 Million species have been discovered with estimates ranging from 3-100 Million more that we haven't
- Activity: Ask students to make a mental image of an animal. Give them 5 minutes to draw the animal, and then 5 minutes to write down how they describe the animal to someone if they had never seen it before and  did not have an image to look  at.
- Notice how the students always/mostly describe the animal  based on their physical attributes. This is also one of the ways that species  are classified
Taxonomy - Identifying,  naming and classifying of organisms into species
Species - group of organisms that can interbreed and produce offspring. There are other definitions used to describe species.

Figure 1E
Morphological:
– body shape, size and other  structural features
•DISADVANTAGES? Often difficult to decide how much difference is too much before naming a new species 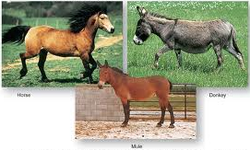 Figure 2E
•Biological
– Focuses on similarities and the ability for the organisms to produce fertile offspring
•DISADVANTAGES? This concept is hard to apply to organisms separated geographically, and organisms that reproduce asexually or are extinct 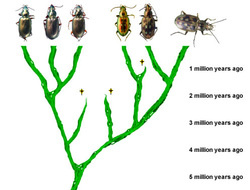 FIgure 3E
•Phylogenetic
– Focuses on evolutionary relationships among organisms; DNA can be used to make connections
-DISADVANTAGES? DNA is not available for some extinct species
CONSOLIDATION:
Activity- Pick a few students to come up to the front of the class and describe to the class the animal they had chosen and see if the class can guess it
Home