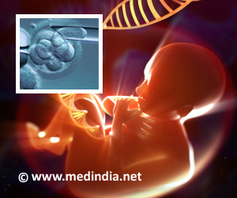 Figure 13C
What is an Ethical Implication and How Does It Relate to Genetic Disorders?
Ethics typically refer to morals or principals of morality and do play a huge role in the issues surrounding genetic testing and genetic knowledge. Discussion regarding the results of genetic testing often revolve around pregnancy termination, especially those results that indicate a genetic disorder for which there is no cure. These difficult topics, coupled with the fact that pre-screening may not have definitive answers but rather possibilities of risk, open up an entire debate surrounding the legal, ethical and social implications of genetic testing. It should be noted that this topic is highly controversial and as such, the makeup of the class must be considered when broaching subjects revolving moral and religious views. That being said, one of the goals of scientific knowledge is to question the "truth" and how it pertains and influences the society in which we live; and in that manner, this very relevant, very current topic is one that should be addressed in some form within this unit.

Lesson Hook:
The following video courtesy of Youtube can be used to introduce the concept of ethical or moral dilemmas regarding genetic testing. This news clip discusses fears surrounding increased abortion rates and the misuse of science.
Pedagogy:
Using the above video can be used to springboard a class discussion about genetic testing that will aid in determining the stance of the class as well as possibly highlight any biases and misconceptions. It can also open the door for the question "how is genetic testing done" which would lead quite nicely into the introduction of the role of a genetic counselor and the process behind pre-screening, newborn testing and carrier testing.

A great interactive way of introducing the role of a genetic counselor and the process of genetic testing, as well as reinforcing the concepts of karyotypes and autosomal inheritance is to use the fantastic simulation courtesy of the Ontario Ministry of Education entitled "Genetic Counseling". Click below be redirected to this interactive activity.  Please note that both a teacher account and Flash player are needed to run this activity.
Genetic Counseling-eLearning Ontario
After students have explored the role of a genetic counselor, and understand the role all individuals play in screening for genetic disorders, it would be a good time to discuss legal, social, and ethical implications in more depth. The National Human Genome Institute has created a fantastic educational resource kit on the topic of ethical, legal and social implications (ELSI) of genetic knowledge. It contains a brief video along with a variety of vignettes meant to address many aspects of genetic knowledge and genetic testing. Assigning each student, pair of students, or group of students one vignette to read and answer the follow-up questions would be a fantastic form of formative assessment for this topic. Click below to be redirected to download  "ELSI of Genetic Knowledge" courtesy of the National Human Genome Institute.
ELSi of genetic knowledge
Debrief:
Having students share a summarize of their particular vignette along with their reactions would be a great way to summarize this topic as well as check for their understanding of the implications surrounding genetic testing and genetic knowledge.