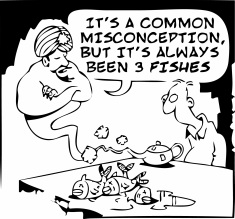 Figure 4B
To address these misconceptions, feel free to browse through the lesson ideas section of the Mendelian genetics topic.

1)  Each trait is determined by one set of alleles.

After learning about Mendelian genetics, students often think that it is easy to predict the phenotype of all traits. However this is not the case as humans have at least 3 different genes which are associated with eye color, and coat color in cats is controlled by at least 6 genes. Furthermore, the number of particular alleles that code for a certain characteristic can determine the extent to which a trait is displayed. For example, the number of alleles that code for production of melanin may  determine your hair color and variation in the darkness.

2) Each gene (trait) has only 2 different alleles.

Alleles are variations for a particular trait. For example, blood types. Blood types are determined by multiple alleles that include A,B, and O

While genes play a huge role in the development of an organism, environmental factors can also affect how an organism develops. Epigenetics is the study of heritable changes that occur without changes in the genome. An example is the cloning of  a domestic cat called rainbow, who's clone had a tabby pattern coat, while rainbow showed a calico coloration. Because Copycat and Rainbow had identical genomes, the differences must be due to epigenetic factors.

4) Every mutation is harmful.

Mutation is a change in the genetic code of an organism. Many mutations are harmful and cause the organism not to develop properly. However, many mutations are silent and some prove beneficial. Examples of this are antibiotic resistance for bacteria. Mutations in their genetic make-up allow them to service in conditions that their predecessors could not.

5) Mostly dominant traits are visible in the population.

The term “dominant allele” sometimes conveys to students that this allele is the one that the impression that exists in the greatest proportion in a population. However, “dominant” refers only to the allele’s expression over another allele. Huntington’s disease is a degenerative disease caused by the presence of a dominant allele, occuring at a rate of about 3 to 7 cases per 100,000 people of European descent. This is an example that dominant alleles don't necessarily have to be the most expressed in a population

Genetic terms are always confusing for students to remember. A word wall is a great technique to use to differentiate instruction to allow all students to learn terms effectively. 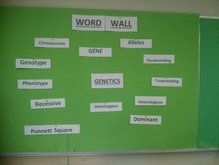 Even though the genetic make-up can sometimes determine the phenotype of an orgasm, there are still countless factors that can affect a organisms growth. This include mutations, the environment, and interactions of many genes that impact the phenotype of a specific trait.

Students often have difficulties understanding the mechanism of dominance. They tend to think that the dominant allele masks or overrides the recessive
allele in some way. They do not recognize that recessive alleles are expressed through transcription and translation, and that they may have functional gene products. Thus, it effects the extent to which the dominant allele is phenotypically shown.