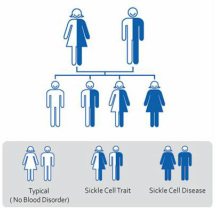 Lesson Hook:
The following video courtesy of PBS can be found on the PBS site in Quicktime format as well as on YouTube for those unable to run Quicktime, and is a great way to introduce the concept of autosomal disorders as well as the concept of heterozygous advantage.
Misconceptions Addressed:
a.Students often think that all mutations are bad
b.Students often think any change will result in a genetic disorder

Pedagogy:
Using the above video is a great way to springboard a class discussion about autosomal disorders and patterns of inheritance. Alternatively, an inquiry approach can be taken to learning autosomal disorders using the "Whirlybird Disorder Activity" given below. This activity introduces the concept of a pedigree as well as autosomal disorders using puzzle pieces to represent different genes. In this manner, students can grasp the concept in a fun way and then be introduced to specific genetic content through a follow-up class discussion. Click below to download the "Whirlybird Disorder Activity" courtesy of The University of Utah.

Download File
It is also possible to extend learning further by touching on genetic components of common diseases such as heart disease and colon cancer. A fantastic activity for introducing the concept of multifactorial diseases is given below courtesy of The University of Utah. Using different coloured pom-poms, students are asked to track and record  genes through generations using a pedigree. Follow-up questions involving analyzing the outcome and calculating risk are also provided, making this a great way to incorporate both higher level thinking and mathematical skills! Click below to download "Pick the Risk: The Polygenic Pedigree Challenge"

Download File
Misconceptions Addressed:
a.Students may think that all heritable traits are only caused by a single gene and exhibit dominant or recessive patterns of inheritance, and not the possibility of the combined action of many genes and environmental factors.

Debrief:
The following video courtesy of Youtube showcases a family with Huntington's Disease and can serve as a great recap of autosomal disorders. In order to check for understanding, have students decide as a class whether Huntington's Disease is a dominant or recessive disorder based on the pattern of inheritance and the increase of the severity of symptoms.
FOPP: Commitment to students and student learning, professional knowledge and professional practice.